9 Beefy Facts About The Brontosaurus

Found in North America, the Brontosaurus is known to us as one of the biggest dinosaurs ever to walk the planet.

Throughout history, it has been a mysterious species of discovery.

With its tiny head and long neck, the beefy Brontosaurus had a large, sturdy body and long tail.

Its appearance and name have been disputed over many years, and new elements are still being unraveled.

Here are nine beefy facts about the Brontosaurus that you should know.

The dinosaur was discovered in 1879. 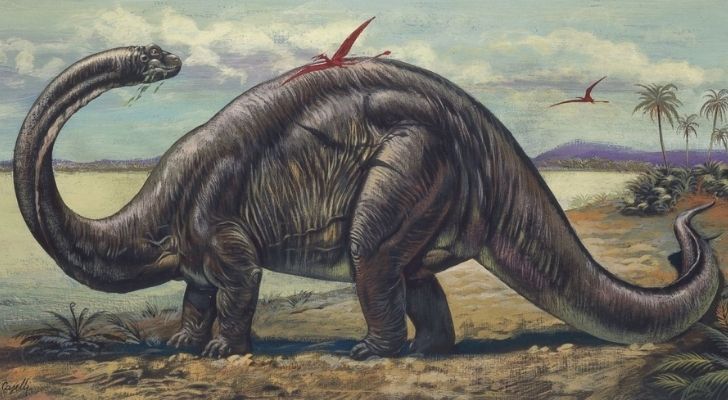 The Brontosaurus was first discovered in 1879 by a professor of paleontology at Yale University.

Professor Othniel Charles Marsh made the discovery after finding an almost complete skeleton of a sauropod at the Morrison Formation Rocks in Wyoming.

The Morrison formation now sits within the Dinosaur National Monument and has been the main site of discovery for many North American dinosaurs over the years.

When Marsh made the discovery, he identified it as being its own species which he named Brontosaurus excelsus.

A publication in the Geological Series of the Field Columbian Museum in 1903 argued that the Brontosaurus was not a new species and that Marsh’s discovery was part of the Apatosaurus family.

No Brontosaurus skull has never been found. 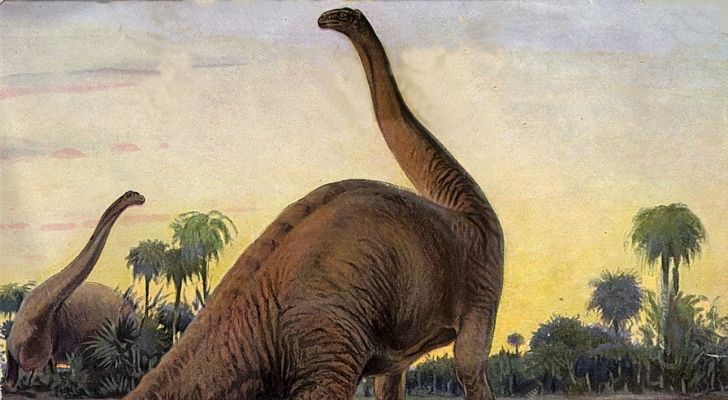 There is yet to be a discovery of a Brontosaurus skull, although scientists have predicted what it could be like.

In 1905, The American Museum of Natural History put on display their first-ever Brontosaurus and sauropod species.

The body consisted of bones that Marsh had found, and the Brontosaurus was constructed as it was expected to look.

However, they did use bones from other species, too, to fill in the missing parts.

As they had not found a full skull, the construction manager, Adam Hermann, had to sculpt a hypothetical skull to sit on top.

This was made completely from predictions and based mostly on the shape and resemblance of the Morosaurus.

It is predicted that its skull would have been closely similar to that of the Apatosaurus, and it wasn’t until years later when a new skull was sculpted for the piece.

The Brontosaurus is NOT an Apatosaurus. 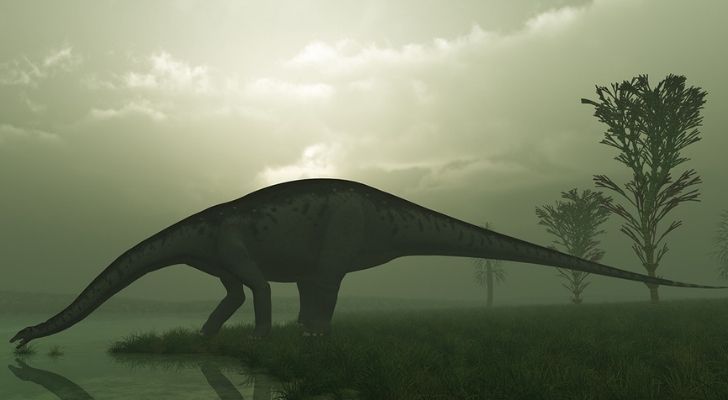 Initially, it was thought that the Brontosaurus was part of the Apatosaurus family.

It wasn’t until many years later that it was revealed that it was part of a different family of dinosaurs.

The two species were very similar, but an easy way to define the two was through its neck.

The Brontosaurus had a higher and less wide neck compared to the Apatosaurus.

It wasn’t until 2015 when scientists discovered that the Brontosaurus was its own family of species.

At the time of Marsh’s discovery, the “bone wars” were taking place.

Therefore, many publications about the dinosaur were rushed, which is often considered the reason why this dinosaur was mistaken as an Apatosaurus.

The two species are closely related and share many of the same features, so it is not surprising that this was debated from 1903-2015. 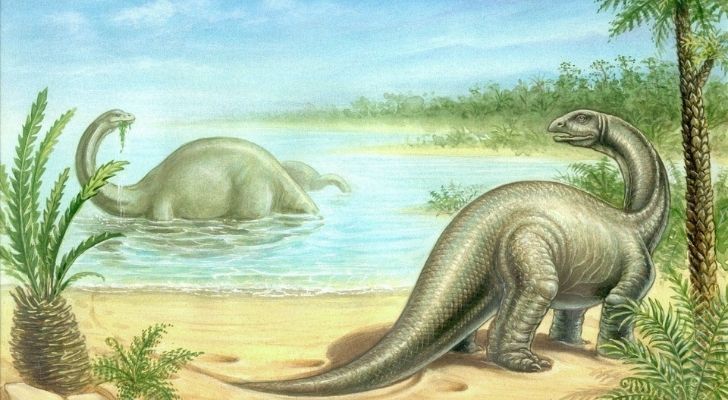 Marsh gave the name after the discovery of a much larger Apatosaurus.

His first discovery of an Apatosaurus, which means deceptive lizard, was in found 1877.

A Brontosaurus could have weighed up to 25 tons! 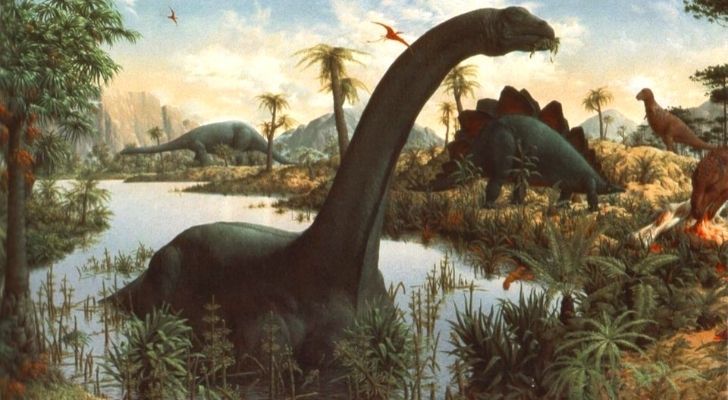 Evidence suggests that a Brontosaurus could have weighed between 17-24 US tons (16,000-22,000 kg), making it one of the largest dinosaurs to walk the earth.

As these are predictions based on the length of bones discovered, it is possible that some could have even weighed more.

They would have been longer from head to toe than they were in height because their tail had to be as long as their neck so that they could stay balanced.

Because of their weight and build, they would have only reached speeds of around 12 mph (20 km/h).

The Brontosaurus was vegetarian. 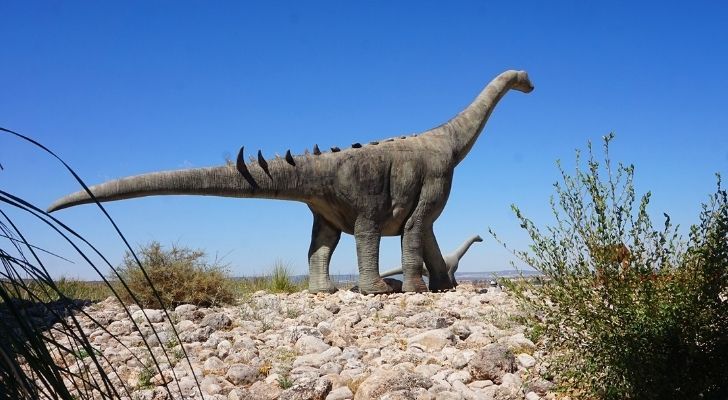 Sauropods were a type of dinosaur that was a herbivore, eating a diet of only plants.

A common trait amongst sauropods was a long neck with a small head.

The long neck allowed them to reach great height for grazing leaves on trees, as well as reaching the ground for flora to graze on.

The large body allowed them to keep balance whilst they elongated their necks to reach food sources.

The Brontosaurus is a member of the Diplodocidae family, which is a group of sauropod species.

A key feature was to have short blunt teeth. This enabled them to pluck leaves and small branches from plants and grind them a little before swallowing them whole for digestion.

A Brontosaurus would live as long as a giant tortoise. 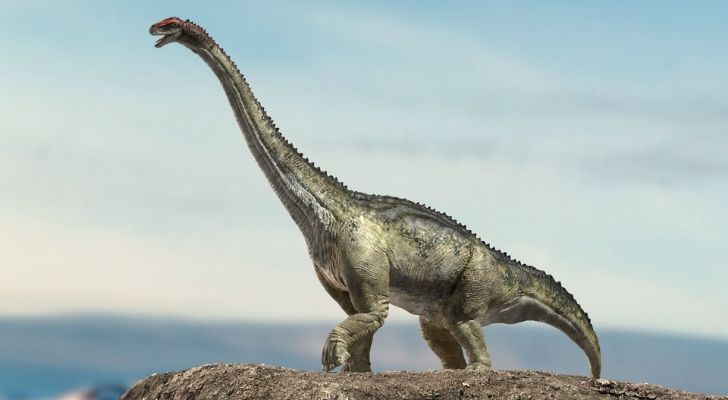 The lifespan of a brontosaurus was similar to that of tortoises today.

On average, they could live up to 100 years, making them one of the longest living dinosaurs.

It took the average Brontosaurus ten years from birth to reach adulthood and its full size.

The Brontosaurus lived in the Late Jurassic Period, which was around 146.8 and 156.3 million years ago.

The Brontosaurus was one of the tallest dinosaurs but had the smallest brain. 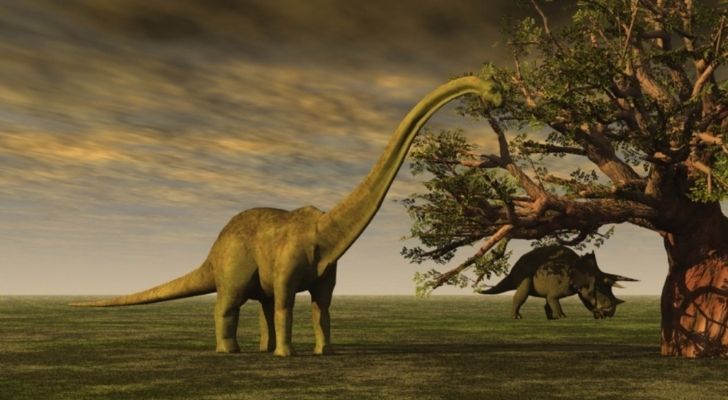 Although the Brontosaurus was one of the tallest of all dinosaurs, it had the smallest brain.

A common trait amongst dinosaurs was to have large fearsome heads but with just a small brain inside.

They were excellent hunters, but they sometimes lacked intelligence.

A reason suggested for having such a small brain compared to its body is that with such a height and length on the neck, the heart would have been under a lot of pressure to pump blood to the brain.

The Brontosaurus would have had very high blood pressure to ensure a steady blood flow to the brain, and having a smaller brain would require less blood and, therefore, less work on the body.

It was once thought that the Brontosaurus, like similar dinosaurs, had two brains, the second brain-controlled their reflexes in the back portion of their body.

But after continued research and more dinosaurs were discovered, paleontologists now think that the suspected second brain was, in fact, just an enlargement in the spinal cord.

Its nostrils were on its head. 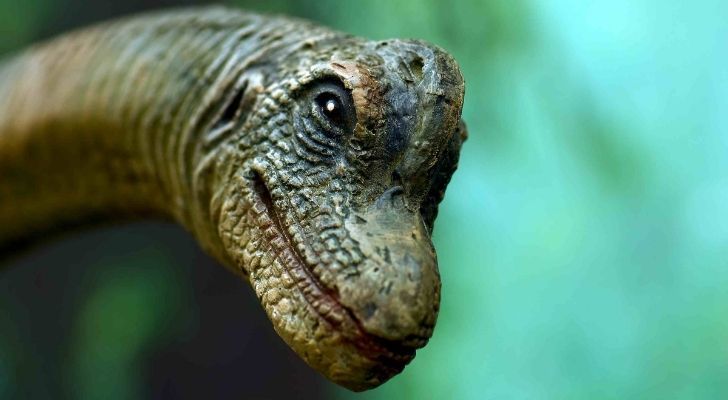 Although a real Brontosaurus skull is yet to be discovered, scientists can predict what it may have been like from closely related dinosaurs.

Research shows that the Apatosaurus had nostrils on its head, making it a unique find, and it is assumed that the Brontosaurus would have looked similar.

It is unknown why the species had nostrils on its head, but it is thought to be related to eating.

Scientists have predicted that the adaptation of nostrils on their heads would allow them to reach food sources in places such as wetland, which they might not be able to walk directly on because of their weight and risk of sinking.

Their long necks would allow them to reach far into the swamp, and by having nostrils on its head, it could search the watery areas for food sources without drowning.

The brontosaurus will remain one of the world’s most famous dinosaurs to have lived.

It is one of the largest creatures that once walked this earth, and as scientists continue to research the disputed species, we learn more about what it looked like and how it lived.

Hopefully, a skull will be discovered in years to come and be the key to completing this mysterious creature.

Did you know that the Brontosaurus dinosaur lived to be around 100 years old?

25 Interesting Facts About Bombs and Explosions

50 Ray Kroc Facts About the Man Behind McDonald's Success

Read More
FFacts
As one of the world’s most elusive species, snow leopards have an air of mystery that keeps experts…

Read More
FFacts
Stan Lee (1922-2018) lived for 95 years, so of course, some very interesting things happened to him during…