Commonly nicknamed the “Keystone State” but also known as the “Quaker State”, Pennsylvania was the second state to join the United States of America on December 12, 1787.

The capital of Pennsylvania is Harrisburg, which is located just southeast of the center of the state.

That’s enough fast facts about the Keystone State for now though, we’re here to learn some real facts!

People might have been living in Pennsylvania for as many as 19,000 years! 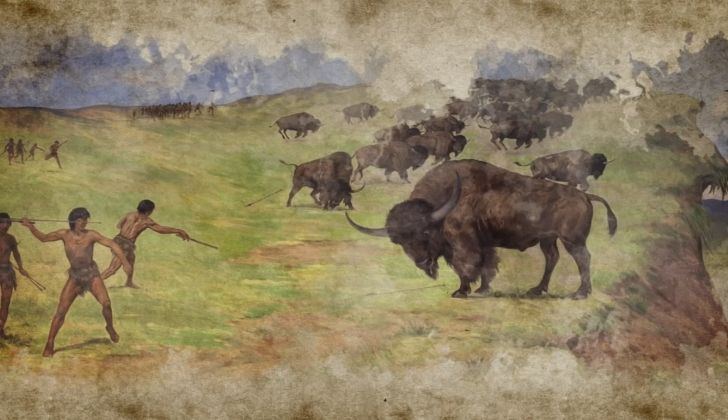 It is believed that the Americas were populated by a group of people referred to as the Paleo-Indians.

They traveled by land from the far east of modern-day Russia across the Bering Strait into modern-day Alaska sometime around 15-13,000 BC.

This was possible during this period as the Bering Strait was actually a land bridge during the late stages of the last ice age.

An archaeological site called the Meadowcroft Shelter, located just 27 miles (43 kilometers) away from Pittsburgh, holds items that indicate that people have been living in the region, for much longer than commonly believed.

Spear tips and knives recovered from the site have been radiocarbon dated to be as old as 16,000, if not 19,000 years old.

The style in which the tools have been created is also considerably different from tools created by later civilizations.

There were a number of Native American tribes living in Pennsylvania when Europeans arrived. 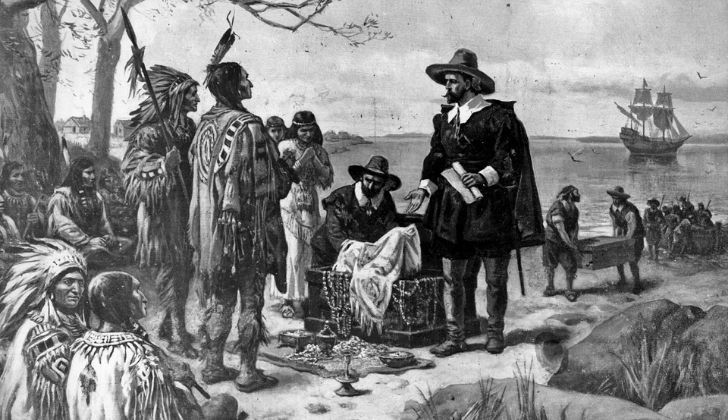 When European explorers first made contact with the Native Americans of modern-day Pennsylvania they soon discovered that the tribes were generally divided into two distinct language groups.

Despite this, each tribe had its own strikingly different cultures and practices.

There were the Iroquoian speaking tribes, which included the Susquehannocks and the many tribes under the banner of the Iroquoian Confederacy.

Other tribes such as the Lenape and Shawnee spoke varieties of the Algonquian language.

This list is not exclusive, as there were many more tribes living in the region, especially when we take into account the fact that many tribes disappeared without a trace when European diseases ravaged the land.

The first Europeans to explore Pennsylvania were British. 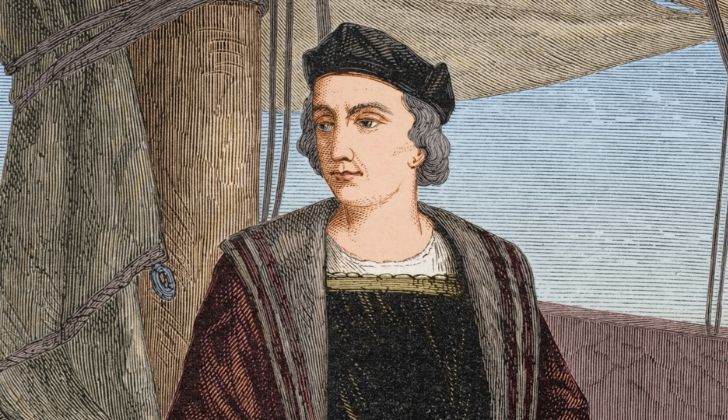 Well, as far as we can be sure anyway. Exploration of the Americas kicked off in 1492 after Christopher Columbus, in service of Spanish monarchs, circumnavigated the world.

In 1497 John Cabot, an Italian in the service of the English Crown became the first European to actually explore the coastline of North America.

Even the French passed by, mapping parts of Pennsylvania from a distance in 1524.

As far as records show, the first European to actually set foot in the region was the English explorer John Smith in 1608.

The first Europeans to colonize parts of Pennsylvania were actually Swedish. 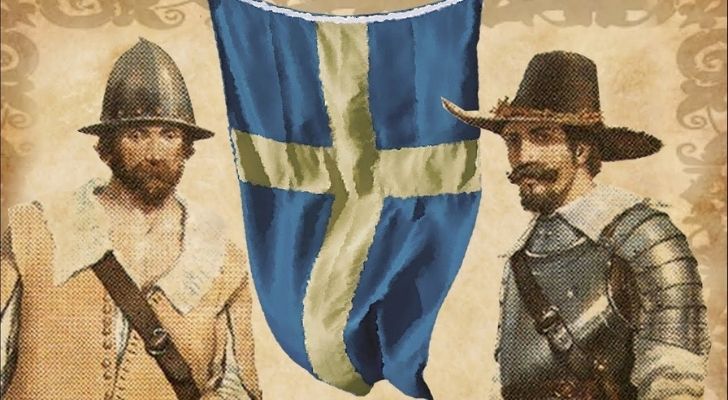 Back in the 17th Century, Sweden was also a major naval power, and they too attempted to stake their claim in North America.

In 1638 the colony of New Sweden was founded on the banks of the Delaware River at the site of modern-day Wilmington, Delaware.

Later in 1643, the governor of New Sweden established the colony’s capital on Tinicum Island within the bounds of modern-day Pennsylvania, making it the first European settlement in Pennsylvania.

The Pennsylvania Colony was founded as a place of religious freedom. 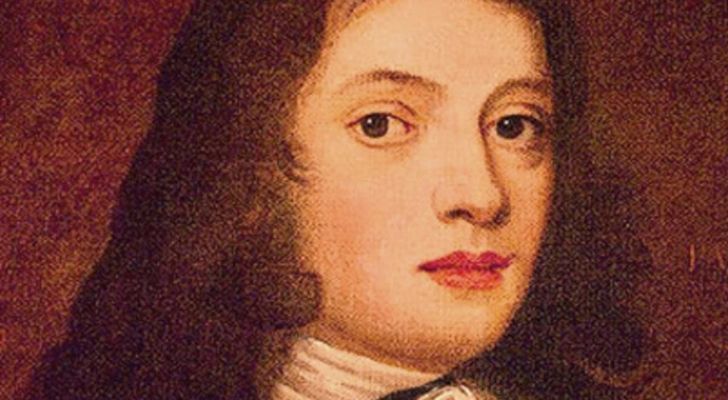 In 1681 much of today’s state of Pennsylvania was granted to William Penn by King Charles II of England.

William Penn was the son of a famous admiral and an early member of the Society of Friends (or Quakers), a new and persecuted Christian sect.

The Pennsylvania Colony was named by King Charles after William Penn’s father.

Written into the colony’s constitution since its founding were laws and charters which allowed freedom of religion for those who chose to live in Pennsylvania, provided they were Christian of course.

As a result, many Amish and Mennonite settlers first came to North America via Pennsylvania.

Pennsylvania was the second state to join the United States of America. 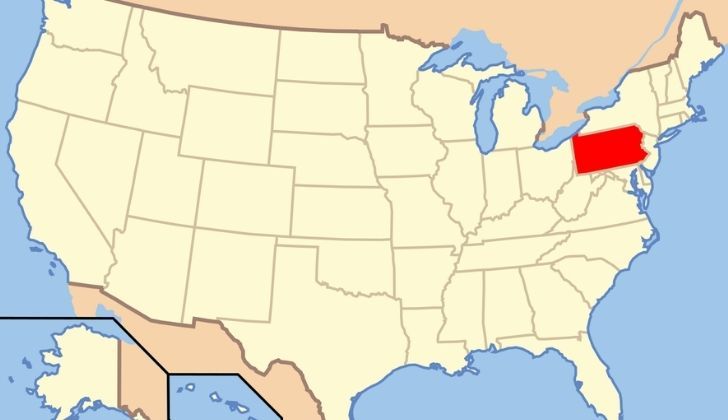 The Pennsylvania Colony, for the most part, shared the sentiments of the other North American British colonies in the build-up to the American Revolution.

People from all backgrounds and classes were tired of unfair taxation without any form of representation.

When the revolution began,  the people of Pennsylvania stood ready.

Much of the greatest battles of the revolution were fought within Pennsylvania, as it was seen to be a key to victory.

The United States Constitution was drafted in 1787 following Britain’s defeat.

The first former colony to ratify the constitution was Delaware, with Pennsylvania ratifying it next on December 12, 1787.

One of the most important battles of the American Civil War took place in Pennsylvania. 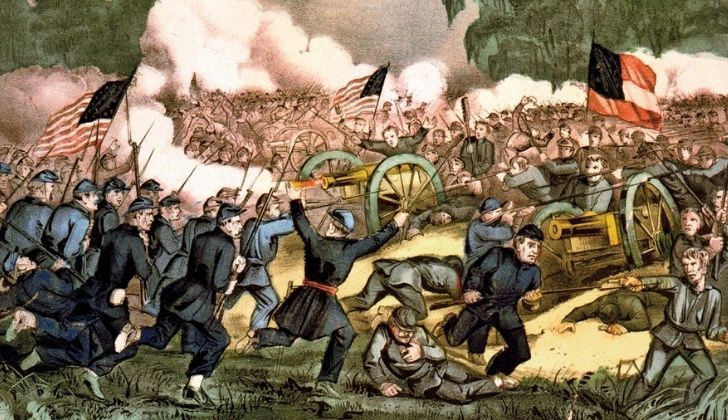 Even if you know absolutely nothing about the American Civil War there’s a good chance you’ve heard of the Battle of Gettysburg, and there’s a good reason for that.

Pennsylvania was a key member of the Union, raising some 360,000 soldiers and contributing large amounts of vital military equipment.

It was also the site of many skirmishes and battles, large or small.

The most critical of these battles was the Battle of Gettysburg in 1863. 104,256 Union soldiers held back some 70,000 or more Confederate troops over the course of the three days.

Defeated, the Confederates fled south, making this one of the most pivotal battles in the American Civil War.

President Abraham Lincoln delivered one of the most important speeches in US history in Pennsylvania. 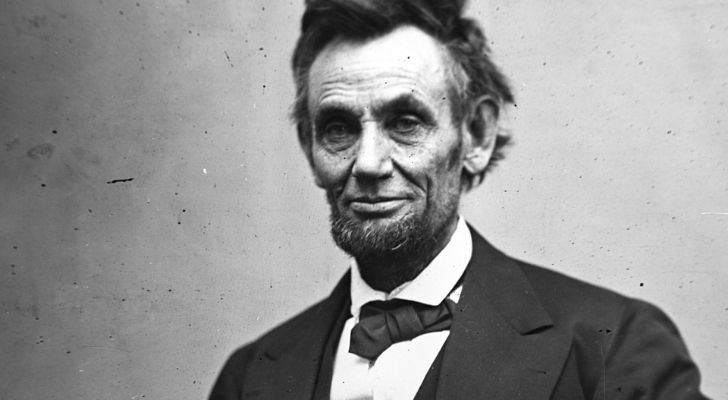 The cemetery itself was built to honor the sacrifice of the brave Union soldiers who gave their lives for the United States.

The cemetery’s dedication ceremony was held on November 19, 1863, and would have been an uneventful one if not for the awe-inspiring speech that President Abraham Lincoln delivered.

In the Gettysburg Address, Lincoln spoke passionately on themes relating to the founding of the United States.

Lincoln covered how the Civil War was a true test for the Union,  the great but worthy sacrifice the Gettysburg soldiers made, and the importance of starting anew.

There’s a good reason Pennsylvania is nicknamed the Keystone State. 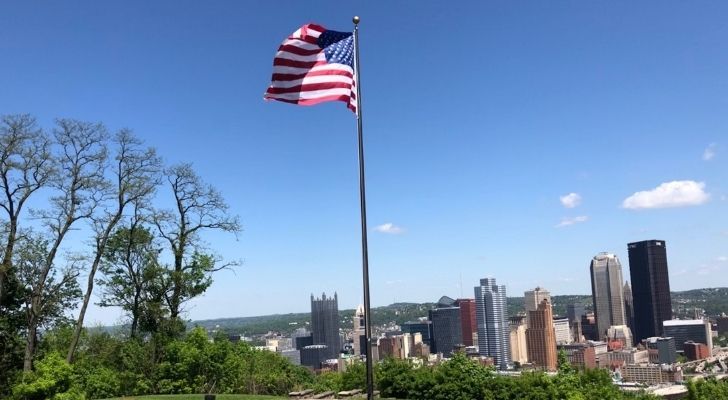 Every time someone refers to Pennsylvania as the Keystone State they honor the central role the state, and the colony, played in creating the United States as we know it today.

To explain it a little, a keystone is an architectural term for the central stone in an arch that secures it and prevents it from falling apart.

The state gains its nickname for its central political and economical role in shaping both the colonies and the United States at its founding.

The nickname birthed the state symbol of Pennsylvania, a keystone.

Pennsylvania is the potato chip capital of the US. 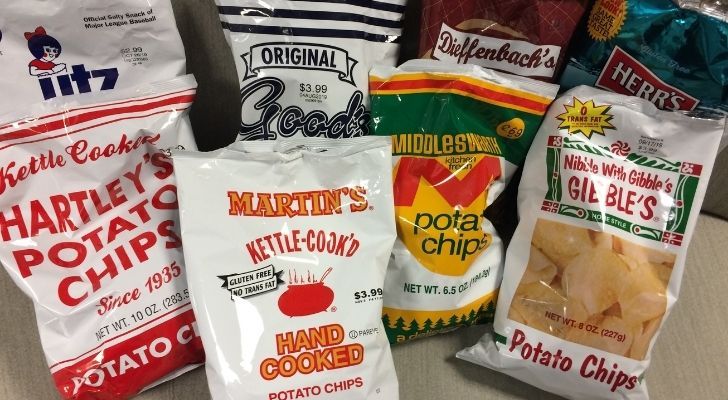 It seems that Pennsylvania is just a little bit mad about snacks, but most particularly the humble potato chip.

So much so that Hanover, Pennsylvania, claims more potato chips (and other snacks like pretzels and chocolate) are produced in the surrounding counties than any other one location worldwide.

There’s no one explanation for why Pennsylvania love their chips, either.

We’re not just talking about your average giant commercial brand such as Lays.

Instead, Pennsylvanians alike all seem to favor smaller local brands, with the larger brands fighting for shelf space in Pennsylvania’s grocery stores.

A fire has been burning in Pennsylvania since 1962. 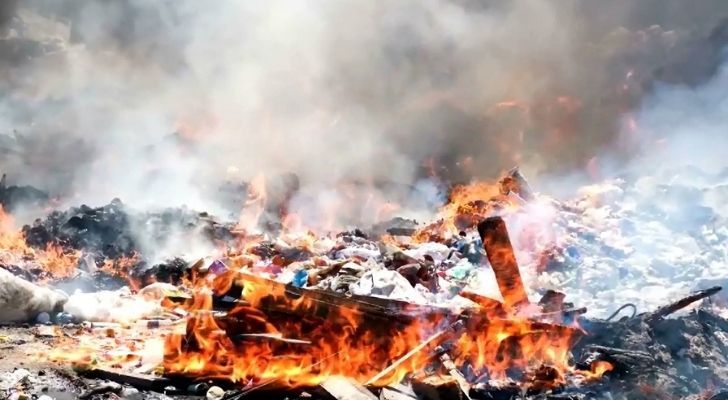 Back in 1890 the town of Centralia, Pennsylvania, was a bustling coal-mining town of 2,700 people.

While the Great Depression greatly reduced the town’s production of coal, mining continued until 1962.

In May of 1962, the city council decided to try and clean up the region and in the process attempted to reduce their overflowing landfill by setting fire to it.

The fire’s blazes managed to accidentally set fire to neighboring coal mines, an event which closed all other coal mines due to the growing coal fire.

All attempts to extinguish it failed, and over time the fires grew to the point which made the streets burn and town uninhabitable.

In 1992 the United States Congress bought out all remaining residents, and Pennsylvania condemned the area and removed all but a few stubborn residents.

Pennsylvania is home to the oldest gas station in the US. 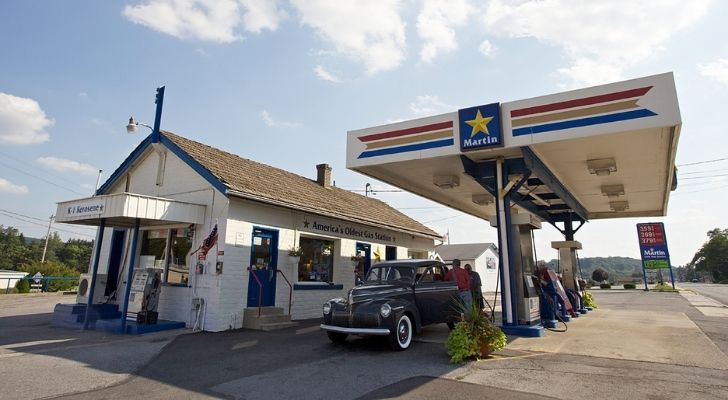 If you drive about 100 miles (160 kilometers) east of Pittsburgh you might find yourself filling up your gas at a living piece of US history, Reighard’s gas station.

Located in Altoona, Pennsylvania, Reighard’s has been continuously operating since it first started selling gasoline in 1909.

Reighard’s actually started off as a blacksmith, and it was common during the beginning of the 20th Century for gasoline to be purchased from blacksmiths.

As the automobile industry grew, Reighgard’s converted into a full-time gas station

A small town in Pennsylvania is known as the “mushroom capital of the world”. 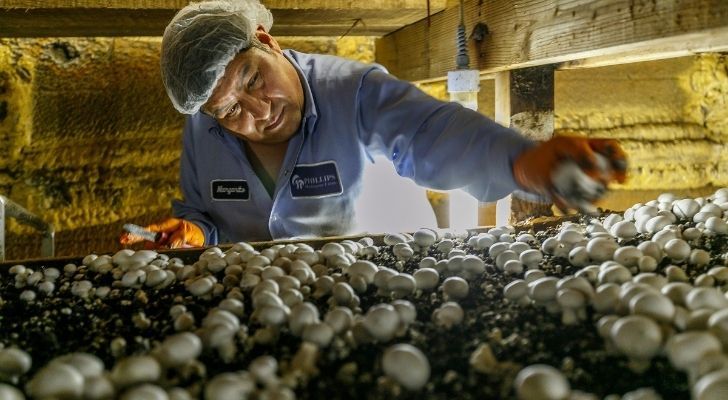 In the 1800s the Quakers, the early European settlers of Pennsylvania, brought a bunch of mushroom spores and started to grow them in and around the town of Kennett Square.

Fast forward to the 21st Century and the region now produces more than 1 million pounds (453,592 kg) of various mushrooms annually.

The county itself produces more than 50% of the entire annual US mushroom crop.

The Philly Cheesesteak was invented in the 1930s. 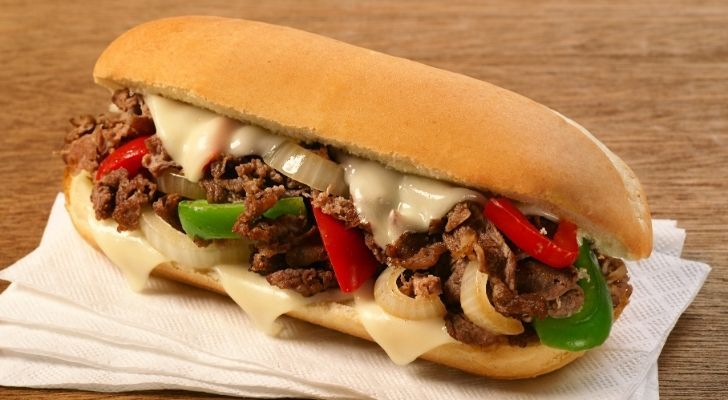 In 1930 a man by the name of Pat Olivieri ran a small hotdog stand just outside the Italian Market in the south side of Philadelphia, Pennsylvania.

As the story goes Pat was working his stall one day when he decided to have something different for lunch.

He bought some cut up meat from a local butcher, cooked it on the grill, and then placed it in an Italian bun along with some onions.

One of his regular customers, a taxi driver, happened to pass by and see Olivieri’s new creation and requested to have one too.

It was apparently so good that the taxi driver insisted that he start selling them, and that’s exactly what Olivieri did.

Over time he changed the recipe due to customer requests to include cheese, from which point the Philly Cheesesteak was born!

Pennsylvania is home to the largest Amish community in the US. 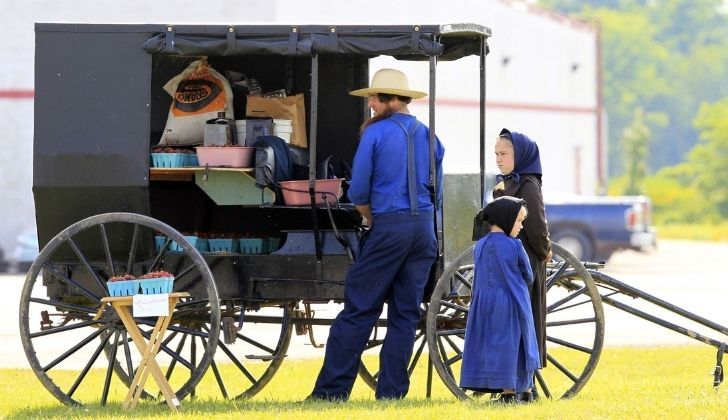 Pennsylvania Colony was founded as a haven for persecuted Christian sects, which lead to large numbers of Amish people flocking to the colony in the 18th Century.

The Amish were persecuted because of their more conservative, traditional beliefs, and they found the new colony the perfect place to practice their religion freely.

These days the community measure around 30,000 people, a number that has actually doubled within the last few decades.

As you can see, Pennsylvania is so much more than just Philadelphia and Philly Cheesesteaks!

As one of the original 13 colonies, Pennsylvania is riddled with so many fascinating histories and stories that it would be impossible to fit them all here.

There’s just something about the state that’s difficult to put your finger on, though.

Maybe it’s something to do with the combination of fast-paced and modern Philadelphia and old-world Amish.

Whatever it is, it certainly makes Pennsylvania a fascinating place to visit!

Did you know that a fire has been burning in Pennsylvania since 1962? It’s estimated to keep burning for over 250 years.

What is cheaply made but sold at a ridiculous price?

Read More
FFacts
St. Patrick’s Day is a popular Irish celebration that is famed all over the world for its lively…

Read More
FFacts
From ancient times until the present, cats have been one of the most common pets in any household.…

Read More
FFacts
The bearded vulture, ossifrage, or lammergeier is a large Old World vulture with an unexpected diet. These bone-eating…

Read More
FFacts
Nowadays, a casual online conversation can often feel dull and incomplete without using an emoji or two at…

Read More
FFacts
Hugging is one of life’s most important acts between humans. We hug when we are sad, joyful, and…